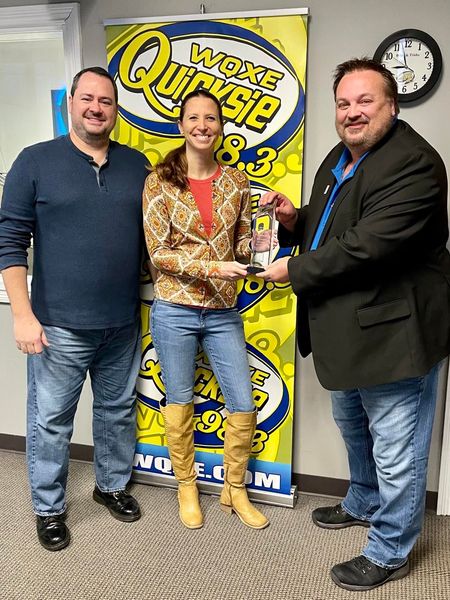 This year marks the second year that Quicksie’s “Morning Show with Brian And Trisha” has been voted the “Best Morning Show” by the Kentucky Broadcasters Association.

While the honor was publicly announced back in November, the award was hand-delivered to the station this morning by committee member Roger Gribbins.

“I would like to say congratulations. You guys do a fantastic job and boy, Quicksie and Elizabethtown and the community are really lucky to have you guys as the best morning show. You do a great job,” Gribbins stated.

Brian Walker and Trisha Caudill have co-hosted the show since September 2019. In addition to winning the award two years in a row, the two have performed numerous charitable works, including frequent blood donations. They are known for mixing community involvement with comedy, going so far as to starting a sign war last summer that about 200 local businesses participated in and lasted a month. Their show can be heard Monday through Saturday from 6 to 10 a.m. on WQXE Quicksie 98.3 FM. The show can also be streamed through the station’s free app or wqxe.com.

Sale of the Old Courthouse