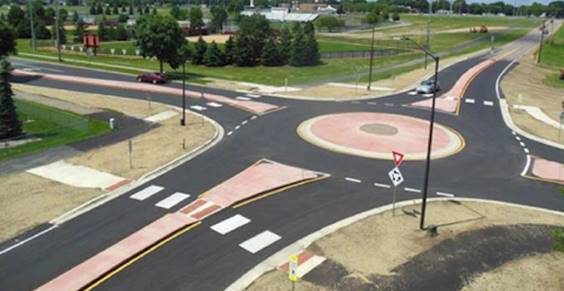 Note: Above image illustrates the design and function of a mini-roundabout. It is not a rendering of the one slated for the intersection of Main St. and Poplar.

After the announcement that one of the first mini-roundabouts was to be constructed near the Brown-Pusey House this spring, several Elizabethtown residents showed up to Monday’s Elizabethtown City Council meeting to voice concerns about the project near the house. Led by members of the Brown-Pusey House board, those in attendance were worried mainly about the structural integrity of the historic building, noting the foundation had to be raised several years back.

Engineers with the Kentucky Transportation Cabinet were on hand to answer questions, hoping to alleviate some of those concerns.

The intersection in question is to be constructed in the same timeframe as one at Main and Crutcher, taking 21 days each to complete. Members of the board said they would meet to discuss a preference over which intersection they would like to see converted first: the Crutcher intersection or Main St. and Poplar next to the house. Representatives with KYTC expressed confidence that the contractor would be able to meet the demand if asked.

The project was conceived in 2019 when KYTC says the city approached them about using funds from the Highway Safety Improvement Project (HSIP) to implement the mini-roundabouts at some of the city’s high accident city street intersections.