Kentucky State Police are investigating a collision in Bardstown that took the life of one of the victims. According to preliminary investigation, George Froelich, 77, was attempting to exit a parking lot when he pulled into the path of a work van operated by 29-year-old Christopher Sympson. Froelich was transported to Flaget Memorial Hospital following the collision, but was pronounced deceased. Sympson was also transported to a medical facility for non-life threatening injuries. The collision is under investigation.

Drought conditions in Grayson County have led to a full outdoor burn ban in the county until further notice. The executive order was issued by Grayson County Judge Executive Kevin Henderson on Wednesday. Those who are found not adhering to the ban are subject to fines or other punishment.

The property tax rates for the city of Elizabethtown were approved at a meeting of the city council on Monday. The rates, which have been unchanged since 2007, kept the status quo, remaining at 11.6 cents per $100 assessed value.

Officials with the Lincoln Trail District Health Department are seeking to offer a syringe service program in Hardin and surrounding counties. This program would offer sterile syringes and needles to those in need, and also deal with the removal and disposal of the materials. The program would also seek to reduce public health issues including HIV. Currently, the closest harm reduction syringe service program is in Nelson County.

Nolin RECC is sponsoring two veterans for the Honor Flight taking off this weekend. The two sponsored veterans are Mr. Dan Thompson from Hodgenville, who served in the Marines during the Vietnam War, and Mr. William Hickey from Elizabethtown, who served in the Navy during the Vietnam War, and later in the Army. The veterans will be taken to see the monuments and battle memorials in Washington, as well as take part in a wreath laying at the Tomb of the Unknowns. Families, friends, and supporters are invited to greet the veterans when their flight returns to Bluegrass Airport at 7:30 PM Saturday. 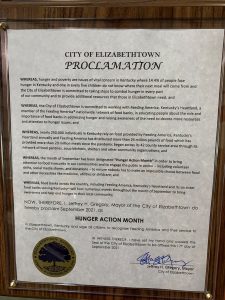